Greenhills Christian Fellowship church plants have been a beloved part of our Canadian Baptist community for a decade–but do you know the history behind the partnership?

CBWC has partnered with Greenhills Christian Fellowship since 2009 with the planting of the GCF Vancouver satellite. GCF Vancouver then planted GCF Calgary in 2010, and that year GCF Winnipeg was also adopted into the GCF/CBWC partnership. These three western Canadian GCF churches will be received at Assembly 2019 as official members of CBWC!

All three of these churches have vibrant worshipping communities. The GCF mandate is to reproduce themselves via future satellites. One such area is Red Deer, Alberta, where GCF Calgary is actively planting a satellite church.

Red Deer is Alberta’s third-most-populous city – after Calgary and Edmonton.  Since spring of 2018, there have been three growth groups meeting regularly in Red Deer where leaders are mentored and trained by the GCF team, consisting of Pastor Sammy Panes (who is current Lead Pastor in the plant), Pastor Cliff Gonzales (former Lead Pastor of GCF Calgary), and Pastor Allan Santos (current GCF Calgary Resident Pastor), as well as other lay trainers. 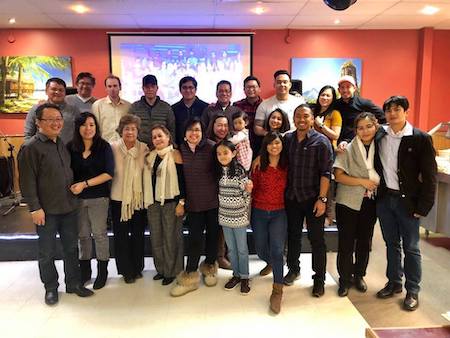 GCF Red Deer began holding public Sunday services spring of 2018 twice a month in a rented church space.  They have around 25 committed members and are ready to move towards the next step of their planting efforts, which requires fund raising to help the new church successfully grow further as they engage an on staff pastor more fully and weekly worship services as well as weekly Growth Groups, plus planning and executing outreach.

CBWC is committed to continuing work with GCF on their multiplying efforts in Red Deer through resourcing, mentoring, coaching by providing CBWC resources as needed and in assisting with welcoming them into our family of churches.