Many of us know the history of our own congregations, but how about the landscape of our city? Do we understand the culture that surrounds us, and do we dream of the God’s redemption in that place? I hope that this article, reposted by permission from Flourishing Congregations Institute, will inspire you to look again at your neighbourhood with Kingdom lenses and ask the Holy Spirit to show you where He is at work in that place.~ Cailey

I’ve lived in the Vancouver area now for twenty-eight years, and in lots of ways it’s a different city from when I first moved here. Our immigrant population will soon overtake those born in Canada. Drivers and cyclists watch each other warily on crowded roads. New condos are going up everywhere. And yet housing is so insanely expensive that some are giving up and moving out. (At this writing, we also have the highest gas prices in North America.)

This city was founded in the late-1800s by fortune-seekers eager to exploit the region’s vast natural resources—lumber, fish and gold—and then move on. Most weren’t too interested in settling down, raising a family or building a community.

That’s still much the same today. “We’re a frontier town with a frontier mentality,” says Jonathan Bird, executive director of the faith-based CityGate Leadership Forum. “There’s a make-it-or-break-it, work-till-you-drop attitude. Or it’s ‘I’m here for a little while and I’m not going to sink deep roots, because I know I’m pulling them up in a few years or a few months.’”[1]

Vancouver was and is highly secular and materialistic. Churches have always had a hard time putting down firm foundations in such hard soil. As one visitor to Vancouver in 1911 wrote in her diary, “People don’t seem to worry much about churches out here.” [2]

Or as L. D. Taylor, the city’s mayor for eleven years between 1910 and 1934, explained why he turned a blind eye to prostitution and other such “victimless” crimes, “We ain’t no Sunday School town.” [3] 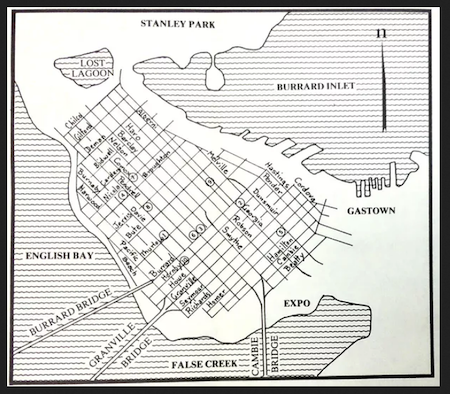 And it still ain’t—I mean, isn’t. In 1888, there were six churches in all of Vancouver, which at that time was not much bigger than what’s now called the Downtown peninsula. Flash forward to 1988. As the map above shows [4], despite a massive ongoing influx of people into the area to occupy the thousands of apartments and condos that were going up, there were still only nine churches in essentially the same geographic area. (I don’t include the First Church of Christian Science.)

In other words, the net increase in the number of churches in the course of a century was a mere three.

But this is where it gets interesting. Through the 1990s and the 2000s, the number of churches in the peninsula grew slowly. But then starting in 2010—possibly as a result of the Winter Olympic Games that year that put Vancouver on the global stage—the numbers rose dramatically; by mid-2015, there were twenty-eight churches and church plants of many denominational stripes on the peninsula.

Alastair Sterne, the pastor of St. Peter’s Fireside, a conservative Anglican church in downtown Vancouver, recalls that even before the church began holding services in 2012, “someone on our launch team shared a prophetic word with me that has stuck. He saw God plant a seed in downtown Vancouver, and it grew roots beneath the streets, and it slowly expanded under the city. But eventually, what started as a small seed blossomed and grew and broke through the ground, the concrete, and filled every crack; what blossomed was seen all throughout the city.” [5]

I wonder—and I hope and pray—that other cities are experiencing this kind of divine activity.

Frank Stirk is the author of the new book Streams in the Negev: Stories of How God is Starting to Redeem Vancouver (Urban Loft Publishers).